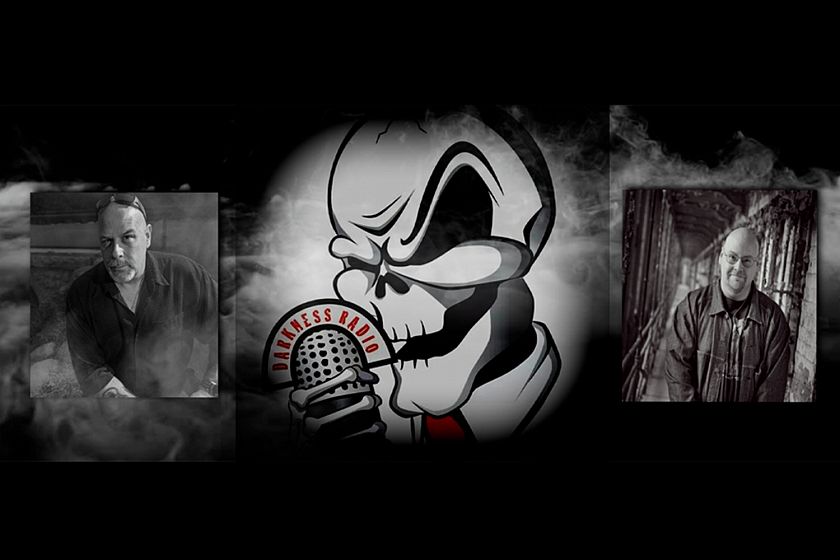 Dave & Tim take listeners on an entertaining journey into all aspects of the supernatural, from ghosts and aliens, to monsters, mysteries, myths & legends with guest experts, experiencers and eye witnesses.

With over 15 years experience they continue to be your guides to the encounters that seem to lie just outside the limits of normal life and just past the boundaries of the darkness on the edge of every town.

Dave Schrader is a long time radio show host that delves deep into the realms of the strange, fringe and bizarre in the paranormal field.

Recently Dave Schrader has been featured as the Lead Paranormal Investigator on Travel Channel's hit TV series, The Holzer Files.

Dave and co-host Tim Dennis started off with Darkness Radio in 2006, which grew into a widely popular radio show. He became a regular fill-in host for George Noory on Coast to Coast AM that is heard world-wide with millions of listeners.

Dave is the former host of Midnight In The Desert, started by the radio legend Art Bell on Dark Matter Digital Network. Currently, Dave is hosting Darkness Radio Presents: BEYOND the DARKNESS Podcast and True Crime Tuesday on Patreon.

Dave is joined by listeners around the globe on adventures and is a popular and sought after public speaker on all aspects of the Paranormal.

Dave travels the world investigating claims of the paranormal, from the historic and haunted battlefields of Gettysburg to Romania following in the footsteps of the real Dracula to Scotland in search of the Loch Ness Monster and beyond.

His public presentations include, The Other Side: The Common Sense Approach to Ghost Hunting.
Ghosts, Angels & Otherworldly Visitors, Frightmare Creatures: Things that go Bump in the Night, Cursed Hollywood and more.

Tim grew up in Minnesota where he attended Winona State University where he studied Mass Communication and Radio Broadcasting. He later graduated from Brown College in 1993. Tim has continued working in radio behind the scenes.

He has worked with Dave since Darkness Radio began back in 2006 as producer, co-host and fill-in host for BEYOND the DARKNESS and True Crime Tuesday.

Tim has done public speaking events and workshops dealing with audio and visual evidence of the paranormal encounters. He teaches techniques on how best to use your ghost hunting equipment and what NOT to do.

Tim's interest in the paranormal also stems from his youth with dream visitations from deceased relatives. Although the more skeptical of the two, Tim remains open minded and willing to explore the many possibilities of the paranormal.